By : Sam Hodder, President & CEO, Save the Redwoods League

It’s a funny thing about trails. They seem to carry a lot more significance than their linear simplicity would imply. For me, trails have always been complicated. Not just because I know firsthand what it takes to build them, but because through every phase of life and all the changes passing years bring, I have always felt most at home on the trail.

From my early memories of following my older sister around the trails of “the Audubon,” the forested reserve in Belmont, Massachusetts, I loved being in the woods. Maybe it was the freedom and independence, the chaotic and beautiful mess of millions of leaves covering the forest floor or the comings and goings of birds and squirrels. Whatever the reason, those hours in the woods made an impression.

So during college, when most of my fellow students were heading to the city for internships and summer programs, I headed to the woods. Through a friend’s older brother, I landed the job of a lifetime building and maintaining the hiking trails of the White Mountain National Forest with the Appalachian Mountain Club’s professional trail crew.

I spent four summers with the Appalachian Mountain Club (AMC), one of the oldest conservation organizations in the country, sleeping in the woods, waking up early and working late, building rock staircases and bog bridges, cooking over wood fires, tending torn fingers and blistered feet, fighting back blackflies and feeling a lifetime away from the world we knew. And at the end of every day, we had built a stretch of trail in the mountains where thousands after us would walk; where step after step, future generations of strangers would get that much closer to the core of who they are. 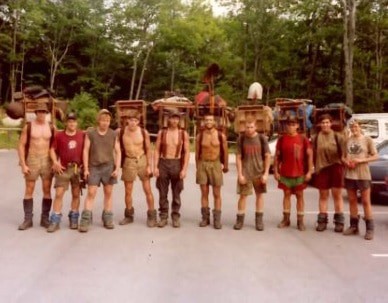 Back at school months later, I would go through the motions of lectures, papers, and exams always thinking about getting back to the woods. There was one memory I would always revisit. In writing it down it doesn’t seem like that big a deal, but I guess that’s the way life-changing moments can be sometimes.

Regardless of how uneventful it might seem in the telling, glimpses that I retain of trails through my favorite wild places are among the defining moments of my life. So during the year when my life in college in New Jersey seemed frustratingly distant from my better self in the woods, I would picture a particular moment alone on the trail, standing on the top step of a stone staircase that took days to build, with the rain running down my face. We were deep in a wilderness area that week and saw little hiker traffic. The rest of the crew was already well on their way up the trail, having finished their projects hours earlier.

I set the last rock on my staircase and stood back to look at my work. I won’t try to explain why, but of all the memories that have been lost to oblivion, that moment, standing there alone in the rain, is etched in my mind. To this day, when I lose my nerve, when fears keep me awake, when I brace for pain or doubt my resolve, that is the moment I draw on.

Needless to say, I gained a lot of respect for trails and the work that goes into creating them. Groups like the AMC began building trails in the 1800s, and later the Civilian Conservations Corps (CCC) brought trail building to a whole new level of artistry as part of the New Deal. I have made several pilgrimages to my favorite CCC masterpiece on the Perpendicular Trail above Long Pond in Acadia National Park. More than 75 years later, this CCC trail with a winding rock staircase built into a steep mountain slope is still a work of art. That kind of art is practiced today by AMC trails crews, the CCC, the Student Conservation Association (SCA) and many others who work on trails to keep the beauty of the outdoors accessible for the rest of us.

Four months after I hung up my double-bit axe at the end of my last summer on the trail crew, I began a career in land conservation. To this day, I am driven by that moment in the rain, that point of transformation, that sense of self and place that for me only solitude in the forest can inspire. And I never forget that someone first saved that remarkable forest for the public, allowing me to have that moment; I never forget that trail workers first built that trail in the mid-1800s so that I could repair it more than a century later. Nor that thousands have since walked that trail to share in a timeless experience of beauty in the woods.

In my current role as president and CEO of Save the Redwoods League, I get to oversee projects that not only protect some of the Earth’s most magnificent landscapes, but that provide ways for people to experience them. Whether saving a redwood forest or partnering with a crew of students to construct a new trail, I get to recreate one of my life’s best moments and pass it on. Nothing could be more rewarding.