When I was 18, I announced to my parents that I wanted to hike 2,000 miles along the Appalachian Mountains. My parents thought I was crazy and couldn’t understand why a girl from California suburbia would fly cross-country to spend months in the woods alone. For years, I consoled my parents by explaining my plans and practicing skills necessary to survive outdoors. Meanwhile, I had my own doubts about whether I could complete a longdistance trail in a season. As a young female, I suspected that thru-hiking might be especially challenging for me. Only 20% of thru-hikers are women and most are a decade older than I was at the time. I was concerned about how male hikers would treat me. I feared how I would be treated as a girl traveling alone. I did not know if my body could withstand walking for months. 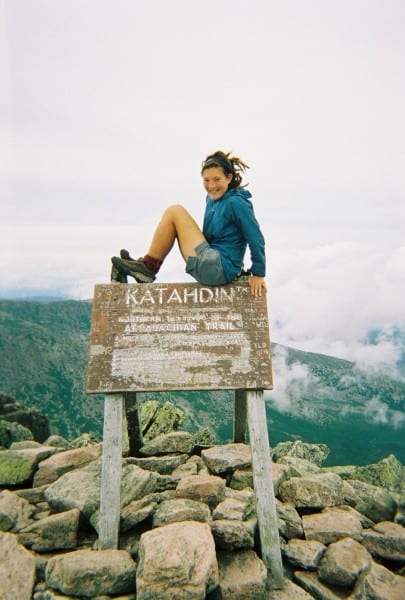 Now, at the age of 24, I am preparing for my third thru-hike. In 2008, I walked the Appalachian Trail (AT), a 2,176-mile footpath from Georgia to Maine. In 2009, I hiked the 2,650-mile Pacific Crest Trail (PCT) from Mexico to Canada. As I prepare for my third trek, 3,100 miles from Canada to Mexico down the Rocky Mountains on the Continental Divide Trail (CDT), I feel more confident about thru-hiking than I did three years ago. Yet, recalling my initial motivations for walking and concerns I had about thru-hiking as a young female, I noticed that I still had not reflected on my travels. I dismissed my preconceptions and tried to forget my initial anxiety. Yet, the comparison between what I thought before my walks and what I think now indicates my growth as a hiker. By reflecting on my own experiences and interviewing three other thru-hikers, I intend to share the motivations young women have for hiking and to discover what we have learned from being females on a long-distance trail.

Like many people of my generation, I spent my childhood glued to the computer and television, rarely thinking of going outdoors to play. One summer break during high school, I decided to go outside my physical and mental bubble and leave behind the fictional digital world. I was determined to gain the confidence, skills, and knowledge necessary to create my own narrative. Reminiscing on my past, my most rewarding adventures had been during outdoor education programs and family outings when I walked somewhere new. I started hiking regularly, and each time I went outdoors, I felt that I was actualizing the desire all young people have: to prove they can accomplish a substantial task and do it on their own. I befriended people of all ages and backgrounds. In the hiking community, I found a place where friendships are formed through teamwork and success.

Initially, I was satisfied completing day hikes and short backpacking excursions. For three summers, I took a field position in the High Sierra to allow a lifestyle of hiking during the day and returning to a research station at night. During one such expedition, I met two grizzled guys with large packs and discovered that they were PCT thru-hikers. After hearing their stories, I became aware of new places I wanted to visit that were only accessible by walking for days. Though I was unsure about being a female, solo thru-hiker, I discovered a new journey that I wanted
to make my own. 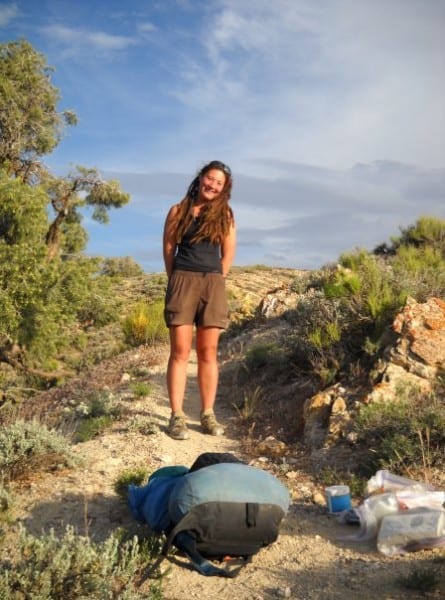 Several years later, I nervously began my journey on the Appalachian Trail. After only a couple days of walking, I realized that all hikers—regardless of gender—start long-distance trails feeling apprehensive. The grandpa wonders whether he is too old to thru-hike. The soccer player wonders whether he can hike with a bad knee. Every hiker wonders whether their own personal handicap will end the hike. I quickly recognized that even though I was a young female hiker, my training prepared me well for the AT. I was faster at thru-hiking than most of my male counterparts. Within
days, my concerns about being physically capable of completing a thru-hike disappeared. About 70 miles into the trek, I met the only other young female I saw on the AT, a girl with the trailname Red. Red and I soon realized that while others seemed impressed that we were women hiking, neither of us believed that thru-hiking was beyond our abilities. Other hikers and townspeople
told us that our journey was extraordinary for young females, but neither of us considered ourselves different than other thru-hikers.

While prepping for the AT, I imagined that for women travelling alone, resupply in town would be the most dangerous part of thru-hiking. Yet, when I came to town, instead of feeling unsafe, I was overwhelmed by the kindness and generosity offered to me by strangers. Thinking that my experience was unique, I asked another young woman thru-hiker, Ally Johnson (Trailname: Bonanza Jellybean), about how she felt in trail towns. Ally enthusiastically reflected that thru-hiking had taught her “the civilized world and the natural world are safe places for young
women.”

Shortly after I finished the AT, I knew that I had to hike the PCT. On the AT, I was struck by the variation between climates, ecosystems, and human communities in our country. Thru-hiking allowed me to appreciate the transitions between these disparate places and I wanted to see that on the West Coast. I yearned to thru-hike again because, in the technology-driven world I live in
as a young person, hiking gave me quiet time to reflect on myself, my goals and my future—a luxury that too few people take the time to do.
* * * 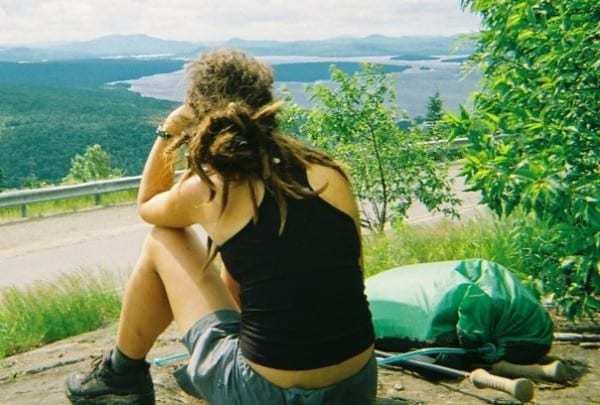 On the PCT, as on the AT, I did not sense physical challenges that I felt were unique to female thru-hikers. At the 2010 Annual Day Zero PCT Kick Off event in Campo, California, Teddi Boston and Carolyn Burkhardt, the first two female thru-hikers on the PCT, also could not think of a physical hardship unique to gender. Lorine Giangola (Trailname: Salamander), a woman who at age 25 finished the Triple Crown (hiked the AT, PCT, and CDT), attributes women as “physiologically at an advantage” for thru-hiking. “When you look at pictures of hikers at Katahdin and the Canadian border,” the most popular termini for the AT and PCT, respectively, “men appear emaciated and women are fine.” Lorine believes that because women have slower metabolisms than men, this gives women an advantage in endurance activities.

After chatting with other young female thru-hikers, it became clear that not all female hikers share Lorine’s and my perspective. Some female hikers noted the differences between the male and female bodies as affecting hiking speed. On the PCT, I hiked in Oregon with Tiffany Searsdodd (Trailname: Miss Information). She pointed out that men build muscle quickly and can sometimes hike faster than women.

“Sometimes I would get frustrated because I was slower, but then I realized that is just how my body works and that comparisons between men and women are not fair. Still, I was determined to prove I could hike just as far.” Ally agreed with Tiffany that “being 5’2”, my legs are shorter than most guys so I walked almost double the steps to get to Canada. But that just makes me that much prouder that I made it!”
* * *
Overall, I found that the hiking community is a place where young women can connect with others—especially other women—who love the outdoors. Unlike the urban society, Ally found the trail community to be resplendent with positive female role models: “Despite how technology connects our world today, as a young woman, I didn’t meet many women like me growing up. On the PCT, I met so many inspiring women who I was in awe of.” On many trails, even when a hiker starts a trail alone, it is often easy to find other exciting thru-hikers to walk with. 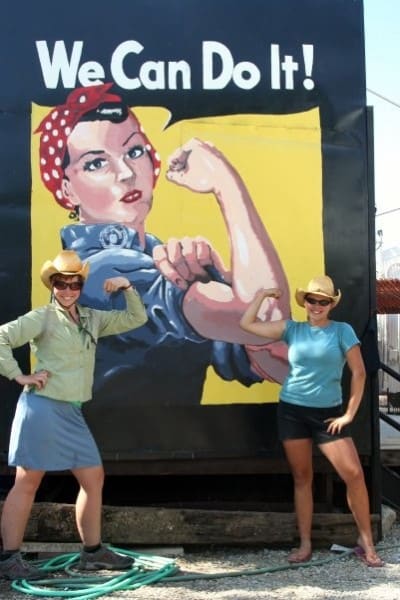 Thru-hiking teaches all people to overcome their internal doubts. It trains the mind to look beyond tests like blisters and exhaustion to actualize an epic goal. Thru-hiking is especially an empowering experience for young people. Ally described a successful job interview she had following her PCT thru-hike where she told an employer, “For the rest of my life, whenever I meet a hard challenge, I will think ‘That can’t be that hard. I walked from Mexico to Canada.’” In a society where young people so rarely feel like they have influence and ability to change the future, thru-hiking can be an empowering experience. I dream that in the next decade, more young women will be inspired to thru-hike and gain the confidence and empowerment that comes from the experience. As a young female thru-hiker, my time spent hiking was not filled with fear or doubt, but with rejoicing in my own physical and mental capability. In interviewing other young female hikers, I found that despite our initial concerns, we all overcame our worries. As I hike the CDT this summer, I will tell my story so that other young women goal for the near future. I can think of no better manner to express the positive experience of thru-hiking than by inspiring the next generation of girls to claim the outdoors for their own.

Elizabeth Tomas (Trailname:  Snorkel) graduated in May with a Masters of Environmental Science from the Yale School of Forestry and Environmental Studies. This summer, she will be thru-hiking the 3,100-mile long Continental Divide Trail. Follow her hike on American Hiking Society’s Facebook page, post your questions, share encouraging words, and congratulate Snorkel on her accomplishments thus far. You may also follow her at www. trailjournals.com/snorkel or www.postholer.com/snorkel.