Imagine a morning hike for a purpose, for a reason you’ve never hiked before. You start out early, the crisp air an energy shot from nature. Perhaps the birds are acting a little different today, and you sense a buzz of something you can’t quite explain. The calendar says August 21, 2017. This is the day to be in Nature, to witness a celestial occurrence that people have been waiting 38 years for. The day when a total solar eclipse will sweep across parts of the continental United States. If you are in the path of the 70 mile wide ribbon that stretches from Oregon to the South Carolina; you will be able to witness the total eclipse. If you are anywhere beyond that ribbon, you will most likely see a partial eclipse. 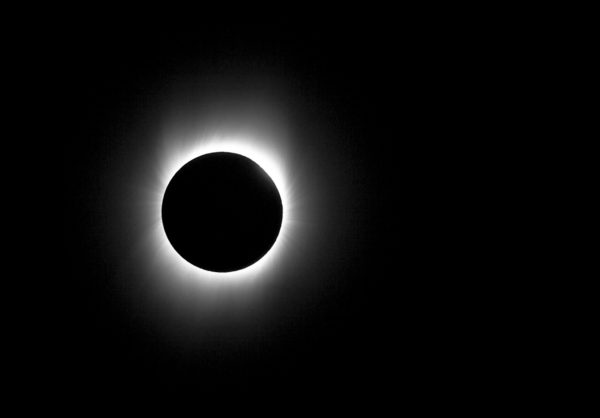 A Total Solar Eclipse occurs when the moon passes between the sun and the earth, blocking the sun completely. The last time one was visible across the US, and not just the coast (1979), was in 1918. This year’s occurrence is history in the making, it is poetry.

As much of the continental United States simmers with excitement for the upcoming event; avid hikers are plotting where they will trek to witness it. The hype will surely make for overcrowded trails and viewing spots. Your best bet is to arrive to the area you plan to be a couple days in advance; and the day of, start your hike extremely early in the morning. Choosing a more difficult hike (if you are advanced) may help you escape some of the crowd. The prediction is that millions of people will flock to the States where totality (when the moon completely blocks the sun) is visible; making for a nightmare on roads and in areas that aren’t used to so many people. It’s going to be important to be well prepared and ready to be stuck in one area for an extended period. Research where you are going, if you don’t already know, and know the terrain.

Tips for viewing the Total Solar Eclipse:
• VERY IMPORTANT: Bring Eclipse glasses (ISO certified), as they are made with an intense enough lens that make it safe to stare at the sun. Otherwise, eye damage is likely.
• Arrive to your viewing area at least one or two days in advance
• Make sure you have a full tank of gas
• If you haven’t made reservations at a hotel or reserved campsite, be prepared to camp
• Bring enough food and water for 72 hours (crowd size could create issues)
• Have the ten essentials on hand if you are hiking
• Bring sunscreen and other sun protection
• Be prepared for cell service to be unavailable and bank ATMs to not work efficiently
• Check the weather forecast, if it’s going to be cloudy; seek other viewing areas

If you plan to hike, here is a small list of hiking areas in the path of the complete eclipse. The exact times of all phases of the eclipse will depend on your location in each state. There are many resources online to help you determine the those times, such as this map.

The Eclipse exits off the coast of Charleston, South Carolina at 4:09 pm EST. 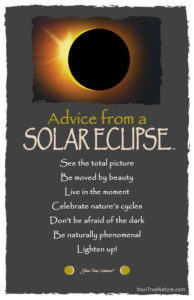 A partial eclipse is also a good way to experience the eclipse, away from the mass amount of people who want to see it in totality. If you’re up for that, you can find some great hikes in Colorado, Utah, and other surrounding states. In any case, remember it is wildfire season and be responsible. Also Leave No Trace.

No matter where you are, whether you are viewing the full eclipse or partial; make the most of it. Appreciate the mystery of this event and listen to what it has to teach you. Perhaps it’s reminding you to “see the total picture” and open your mind to different things. Or to always “be moved by beauty” and “live in the moment”. Total Solar Eclipses aren’t directly viewed from land too often; so appreciate the treat. We don’t always need a reason to “Celebrate nature’s cycle,” but sometimes it takes a phenomenon to initiate it. Perhaps when the sun is completely blocked, you put your life into perspective and realize you should “lighten up” a bit. As with all things in Nature, there are many lessons awaiting us if we open ourselves up to be taught them. Let the Solar Eclipse impart its wisdom on you, for you may never witness one in person again. It will be a hike you will never forget.