Fifteen years ago, the movie Pay It Forward popularized the idea that the best way to repay a favor is to do a favor for someone else—to pay the favor forward, in other words. But, as Scouting alumnus Peter Johnson demonstrated last fall, it’s actually possible to pay a favor back and forward at the same time. 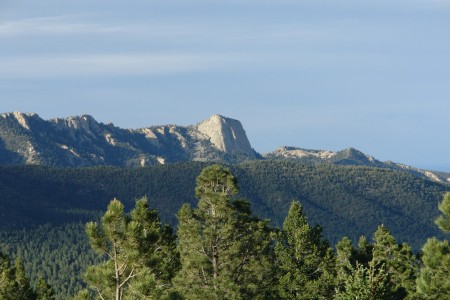 During their Volunteer Vacation, the Johnsons helped build a trail between Deer Lake Mesa and Harlan Camp in Philmont’s central country, a project that involved such tasks as building switchbacks and rock walls. The crew worked hard, but they also got to enjoy Philmont’s scenic beauty, both at the work site and in their time off. “We hiked to Window Rock to see the sunrise,” Johnson says. “We also got to climb the Tooth of Time on the last day.”

Why did the Johnsons participate in the Volunteer Vacation? “When I heard about the trip, I thought it would be a great way to go back and give back by volunteering,” Johnson says. “We volunteer locally, but this was a priceless experience at a place we both have great memories.”

If you’d like to make great memories of your own, check out this fall’s Volunteer Vacation at Philmont, which will be held September 19-26. A crew of 24 volunteers will be continuing construction of the Deer Lake Mesa trail the Johnsons worked on. For complete details, visit HERE.

“If you have ever thought of going back to Philmont, this is a great way to come back and give back at the same time,” Johnson says